Lob prevented us from having to deal with the print and postage associated with letters. It allows us to focus on our mission rather than providing the infrastructure to deliver these letters. The overhead to do this without Lob would have been enormous. 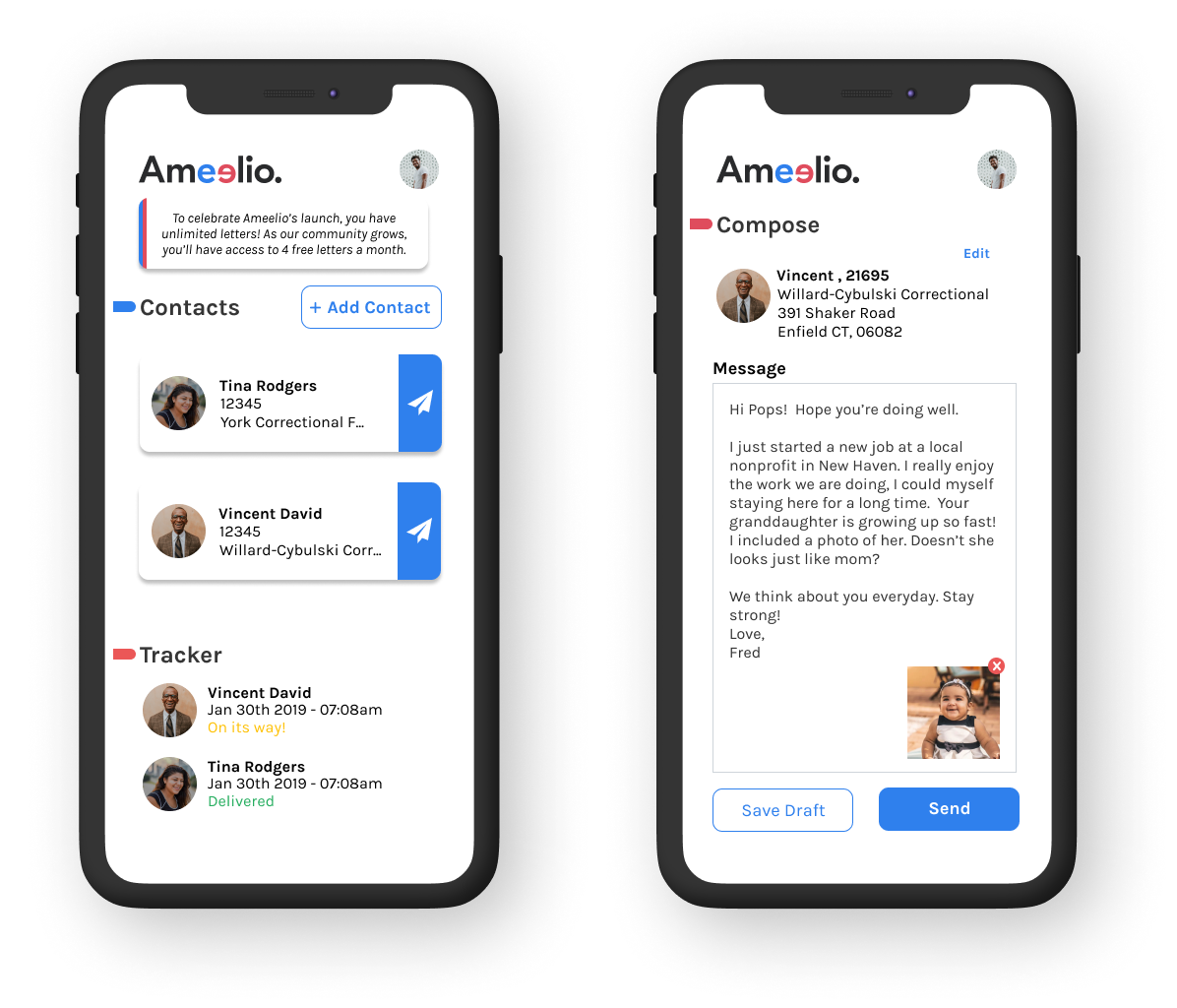 Uzoma Orchingwa, and Gabriel Saruhashi are co-founders of Ameelio, a non-profit startup focused on criminal justice reform. “We envision Ameelio as an ecosystem of prison communications that enable loved ones to communicate with their incarcerated family members,” says Uzoma. The first piece of their platform is a recently launched, free web and mobile app that allows people to send letters to incarcerated friends and family members in the same way they would send a text or picture. “We pushed up our launch as we saw the effects that COVID-19 was having on incarcerated individuals and their families,” said Gabriel, “Prison visits are being curtailed across the country, and in some cases phone conversations are being limited to 10 minutes. We knew we could make a difference for many families.”

The idea for Ameelio was born while Uzoma and Gabriel were in college. “I did a thesis on mass incarceration as part of my fellowship at Cambridge,” said Uzoma, “I was really passionate about criminal justice reform, but I wanted to do something that would allow me to make an immediate impact. It’s heartening to see how the issue is getting national attention, but the reality is that laws and regulations are primarily set at the state level. Any reform necessarily takes a long time.”

Communication Challenges in the Prison System

Communication, however, was something they could attack immediately. “I think a lot of people don’t realize how exploitive the prison communications system can be,” said Uzoma. Telecom companies negotiate exclusive contracts with prison facilities, and use their monopoly power to charge exorbitant rates. “It’s not unusual for family members to pay as much $25 for a 15 minute phone call. It’s easy to recognize that most people who are incarcerated are from lower economic tiers. One in three families goes into debt because of the costs of communicating with their loved ones.”

Sending mail to people who are incarcerated can also be challenging. “Facilities can have weird address quirks,” said Gabriel, “Their mailing address isn’t always the same as their physical address, and to get mail to an individual inmate, you have to know their inmate ID. You can’t just use their name.” These requirements can lead to frustration. “Different facilities have different strictness rules about what mail they’ll accept and what mail they won’t. It’s hard for family members to understand these rules, or know for sure if their mail is actually reaching their loved ones.”

A New Way to Send Mail to Loved Ones

The Ameelio app is designed to make it simple for friends and family to communicate with their incarcerated loved ones. “We wanted to eliminate both the cost and hassle of communications,” said Uzoma. The first piece of this was giving users better address data. “We pulled together different lists and databases of over 1,800 prison addresses, and made them accessible within the app,” said Gabriel, “We then ran all of that address data through Lob’s Address Verification API to correct and standardize it. This way we have a set of mailable prison addresses that people can just select from. They don’t have to worry about getting the address right, or if their mail is going to get there.”

The same visibility and transparency is applied to mail the users send as well. “Lob’s webhook feature was really powerful for us,” said Gabriel, “People are anxious about the mail they send to their loved ones. With Lob we can show them the progress of the letters directly in the app, and let them know when their mail is delivered.” Lob allowed Ameelio to quickly build out their direct mail functionality. “Our webhook was integrated in less than a day,” said Gabriel, “It wasn’t hard to connect to the Lob API at all. We were able to build this MVP and launch it in less than a month.”

The alternative to Lob would have been to build out a traditional print & mail process. “Lob prevented us from having to deal with the print and postage associated with letters,” said Uzoma, “It allows us to focus on our mission rather than providing the infrastructure to deliver these letters. The overhead to do this without Lob would have been enormous.” Lob has been a supportive partner. “As a non-profit we spend a lot of time explaining our mission and approach to companies. The leadership team at Lob got what we were doing right away, and were enthusiastic about helping us.”

Since launching the app, Ameelio has seen quick adoption. “In the first week we sent 300 letters, and registered over 360 users in the platform,” said Gabriel, “So far we’ve only been promoting through Facebook groups and word of mouth, so we’re really excited by the adoption so far. 88% of users have successfully added a contact which we see as a critical step in the customer journey.”

Improving communications with incarcerated individuals isn’t just about saving money or wellbeing. The team at Ameelio sees this as part of a broader set of positive outcomes. “We don’t just want to improve quality of life, but we want to address the issue of recidivism,” said Uzoma, “Studies show that the more contact inmates have with loved ones the less likely they are to go back.” Lob is helping to inform this as well. “Lob’s data will be really helpful in helping to understand the connection between communication and recidivism. We can track how different facilities accept mail, how often it’s returned to sender, and whether looser communication rules will show up in a facility’s recidivism rates.”

Letters are just the start for the Ameelio team. “We plan to add postcards for shorter messages,” said Uzoma, “And then ultimately branch out into video chat and other communication channels. We have so many ways to communicate with our families and friends for free. Why should it be any different for people in prison?”

Ready to Get Started?

Contact us for a personalized demo.
Get a Demo