If you’re in the business of sending direct mail, Lob is the best in the industry. 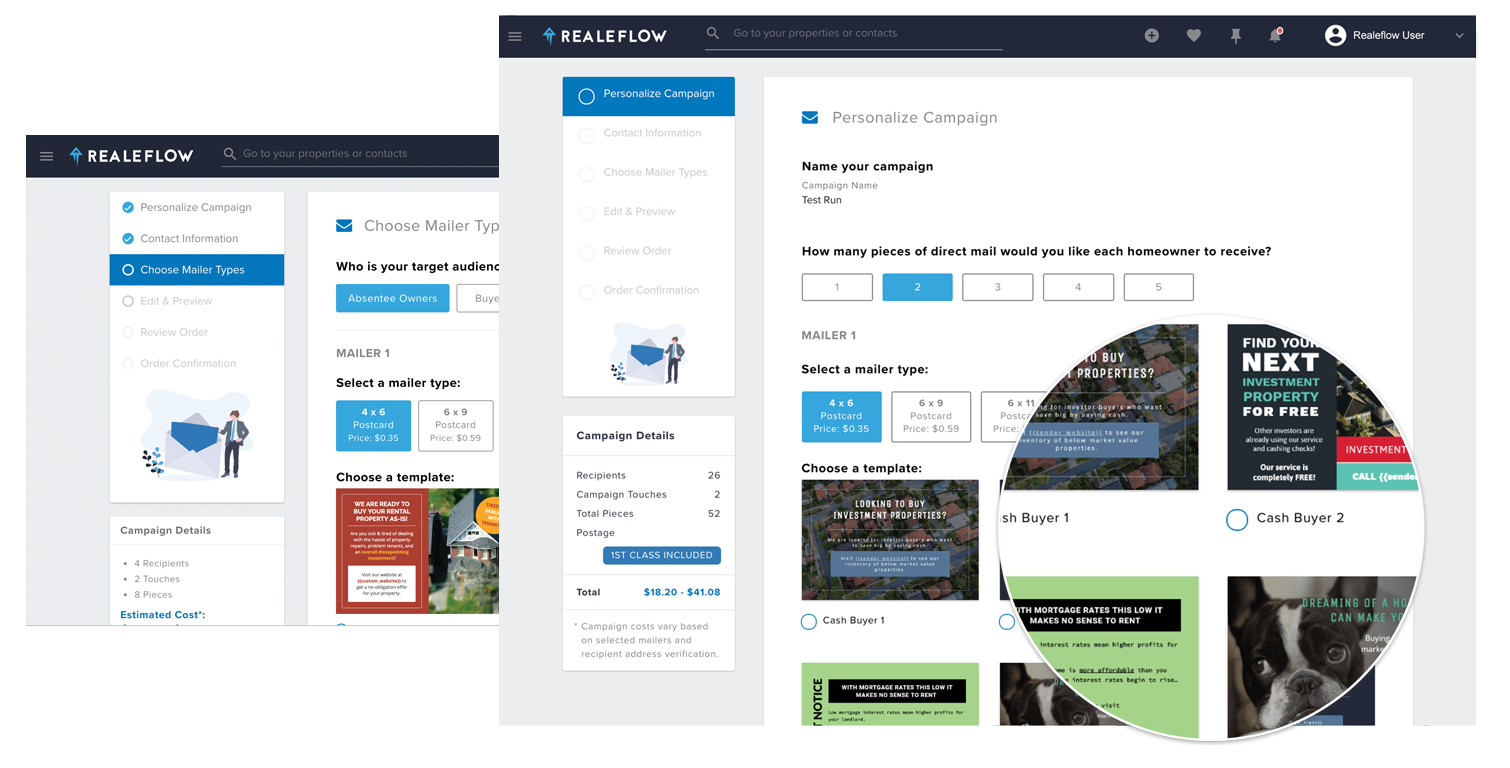 Realeflow was founded by CEO Greg Clement in 2007, who started by creating workarounds to streamline the many manual processes he personally encountered while working as a real estate investor. Rather than relying on external consultants or vendors, his passion to automate parts to this puzzle ultimately led to the creation of Realeflow, a software company. Since its founding, Realeflow has evolved to be an integrated marketing platform for real estate investors,  helping them to generate leads and engage with prospects in local markets for residential homes.

Austin Hale, Realeflow’s CTO, led the effort to revamp Realeflow’s SaaS marketing platform with a robust API suite for marketing channel integrations. As a former product manager and real estate investor himself, Austin was familiar with Realeflow’s platform and knew that it had limitations with direct mail campaigns, which has always been one of the highest performing lead generation tools for real estate investors. Austin took these insights to guide the roadmap for Realeflow’s development of a truly operational, effective, and seamless experience for their new customer marketing platform.

Because direct mail marketing is a tangible form of communication, it has the unique ability to capture it’s audience’s attention, which allows realtors to connect with motivated potential home sellers. However, manual direct mail campaigns lack insight which means investors have typically had to run large scale acquisition campaigns to yield any meaningful results. It was an inefficient process for all real estate investors, including Realeflow and their users.

As part of its service offering, Realeflow partnered with a number of companies that served as middlemen between their customers and print shops. At the end of each week, Realeflow would aggregate all customer campaigns, and send them to their print vendors. This process required lots of back-and-forth between all involved parties and had tons of programming challenges, meaning that small errors, like spelling mistakes, would go unnoticed until a piece of mail was printed. The process also meant that Realeflow couldn’t get any visibility into their direct mail campaigns or their potential effectiveness, which took 2-3 weeks from start to finish.

Austin and his team realized that Realeflow’s prospecting and acquisition services were rather underutilized within their customer platform; these tools ran on direct mail and came with long lead times. This insight served as a catalyst for Realflow’s efforts to revamp their suite of product offerings to better meet the needs of their investor audience. Austin remembers, “As a company, we wanted to take it upon ourselves to show the value of tools and make it more available and accessible to subscribers.”

Upon stumbling across Lob, Austin and his team quickly realized it presented a dramatically better way to do business. They decided to reconfigure their direct mail tooling to integrate Lob, which allowed Realeflow to significantly improve their users’ holistic platform experience that starts with prospecting and acquisition. In three months, Austin’s team developed a new direct mail wizard, creative templates, and copy. “Implementation was as smooth as it possibly could’ve gone,” Austin said. “We were blown away by the quality of the Lob API, documentation, and the depth of content which were all good. We did a lot of experimentation to optimize the UX and platform interface.”

The new platform debuted in June 2019 to much fanfare, with Lob fully integrated into the Direct Mail Engine, a key acquisition tool. Users were now able to choose the size of their postcards and letters, access a library of predesigned templates, perform wholesale uploads of images, and engage a Realeflow developer for consulting services. This empowered Realeflow’s users with insights and resources that they previously did not have access to.

Within the first 30 days of launch, Realeflow saw over a 300% increase in the number of direct mail campaigns that were successfully created, with over 200% increase in the number of unique accounts that used the Direct Mail tool on the platform. Since its debut, the product adoption rate has steadily climbed, and with lower direct mail costs for Realeflow, they were able to pass more savings directly back to their customers.

Another unexpected success came in the form of highly targeted, personalized mailings. Lob’s detailed mail tracking and analytics allowed Realeflow’s customers to better segment their audiences in a more granular fashion, and measure campaign performance for each of these cohorts. Now, Realeflow customers were able to create highly refined lists and optimize hit rates without having to send as much in mail volume by actively performing A/B testing, which earn higher call back rates. Austin says that this has further established Realeflow’s value.

“To enable customers to know that any particular mailpiece will be in someone’s mailbox in the next 24 hours, we were able to implement tracking numbers that customers can purchase via Twilio and embed these custom phone numbers on each campaign that was sent out. As a result, customers were able to track all unique text messages and phone calls that came back for specific campaign cohorts.”

Utilizing the Right Solution to Expand a Powerful Channel

Given the resounding success of Lob, Realeflow has been busy experimenting with direct mail for their own retention marketing and product launch promotions. In a recent experiment, they sent postcards to their best customers with pre-generated coupon credits. This evolution from strictly being a prospecting tool for real estate investors to a broader marketing use case speaks to the potential and underlying strength of Lob.

Austin’s advice, “Try it. There are many companies that have outlandish marketing claims, but Lob understates what they can do and what they’re about. If you’re in the business of sending direct mail, Lob is the best in the industry.”

Ready to Get Started?

Contact us for a personalized demo.
Get a Demo